So I promised you a noodle kugel recipe, didn’t I?

First, for you non-Jews out there, what the heel is a kugel anyway? Well, according to Wikipedia; “Kugel is a baked Ashkenazi Jewish pudding or casserole, similar to a pie, most commonly made from egg noodles (Lokshen kugel) or potatoes, though at times made of zucchini, apples, spinach, broccoli, cranberry, or sweet potato.” I’d say that’s a pretty accurate description except for the thing about pie. Kugel is nothing like pie.

Though, as Wikipedia mentions, kugels can be made with a variety of things, most commonly kugel refers to the potato or noodle variety. The potato version, which everyone loves except me, is always a savory dish; whereas the noodle version straddles the line between sweet and savory. Though noodle kugel is a sweet dish, often making use of things like raisins and cinnamon, it’s commonly served at brunches alongside bagels and things.

The version my family makes is from a recipe given to my grandmother by a friend back in Brooklyn and as far as I’m concerned it is the best noodle kugel around. I’m not planning on making another one anytime soon so forgive that I’m recycling the photos I took when I made a noodle kugel for Mandy and her mom.

That’s Mandy’s kitchen, not mine. 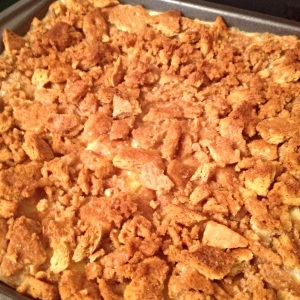 Hot out the oven.

Meanwhile, mix together all other ingredients except for the butter and graham cracker crumbs.

When the noodles have finished cooking, drain them and then add to cheese mixture.

Pour the noodle in to your greased pan. Mixture will be quite loose.

Cooks Notes:
* Pot cheese is often labeled pot style cottage cheese. If you can’t find that use a reduced fat (NOT non-fat) cottage cheese as it will be thicker.

*You guys get what I mean by “sleeve,” right? Like you buy a box of graham crackers and it comes with 3 separate plastic packaged sleeves inside of it. Use one of those.

This is a dish that reheats extremely well. For individual servings I suggest just cutting yourself a square and then microwaving it for 10-20 seconds just to bring it up to room temperature.