If you read this blog at all, you know that there are certain chefs who I consider my personal heroes. One of those chefs is Bill Telepan, chef/owner of the eponymous Telepan.

Bill Telepan doesn’t have a regular TV gig and he’s not famous outside of foodie circles, but he’s widely admired in chef circles. His restaurant garners top marks, including a 27 Zagats rating. Bill Telepan is also a prime example of what I call “a true foodie.” He’s a chef who was sourcing locally and sustainably before that was cool and he is very active with local hunger charities.

His restaurant is also 3 blocks from my house!

I’ve been dying to dine at Telepan, but you may be shocked to find out that working for a social justice organization while living in the most expensive city in America doesn’t exactly leave me with a ton on expendable income. Luckily last week was restaurant week and restaurants across the city, including Telepan, offered a 3 course meal for $38!

I’m not as big on restaurant week as you might think because the special restaurant menus have limited choices which is not a great thing for people with food allergies. However, I took a look at the menu posted on Telepan’s website and saw what looked like many safe items so I messaged my friend Paul and Janet to see if they wanted to join me and booked us a table!

I booked through Opentable because it was hard to get a reservation so I wanted to snap up a table when I saw it. This meant that U didn’t call ahead to tell them about my allergies as I usually do, but rather typed a note about them to the online reservation. I wasn’t worried because Telepan is a high end restaurant which is where I generally have my best experience as an allergic diner. Also, I’ve used Opentable before, though usually for restaurants I’ve dined at before, and found that the maitre d always checks the notes.

I met Paul and Janet at the restaurant. When we checked in with the hostess I was surprised that she didn’t say “and we have a note about food allergies,” but I figured that our waiter would mention it at the table.

After we were seated at the table and our waiter came over I handed him one of my allergies cards and said, “I’m sure that you have this already, but please let the kitchen know that I have these food allergies.” I was greeted with a blank stare. This was clearly the first my waiter was hearing of my food allergies. Fail #1.

Telepan has a cool concept for restaurant week. For the $38 price you can order either an appetizer, mid course and entree, though the whole table has to order the same option. Since Janet is the only real sweet eater of the group we decided to go with the mid course option and then split a dessert off of the regular menu if we felt like it later.

After we’d placed our order and our drinks had been served, another member of the staff (not sure what to call him, maybe a runner?), came over with an amuse bouche of cheddar gourges. I asked if they were safe with my food allergies. He gave me a “how the hell should I know look?” and told me to ask my waiter. Fail #2. At high end restaurants they usually tell all the staff when a table has food allergies and I’ve been told at other high end restaurants more than once that they’s “Never offer me anything they hadn’t made sure was safe first.”

It took an absurdly long time for us to flag down our waiter. When he finally came over and I asked about the gorges his response was not, “I’ve already checked” or, “I’m so sorry I’ll check with the kitchen,” but “Umm, I mean I think there’s just flour and cheese.” Fail #3. Big, huge, fail. First of all that did nothing to make me feel safe. Second, really there are only two ingredients in your gorges, flour and cheese? Can I get that recipe then because I’ll make them every day. Needless to say, I didn’t try the gorges.

The appetizer was the only course I’d had trouble ordering. The only thing on that menu that I could eat was shrimp and grits, which I love, but they came with a coddled egg. I do NOT eat runny eggs. But I just figured I’d order it and eat around the egg, which is exactly what I did.

The dish was tasty. The shrimp were perfectly cooked and nice and spicy, though the grits could’ve been a bit smoother.

For the mid course I ordered the egg pasta with smoked brussels sprouts. Which I thought meant egg-pasta, not a pasta that would have another coddled egg on it. Oops! This egg was wobblier than the last. After a good laugh, Paul, a runny egg aficionado said, “I’ll take your egg.” So, with the precision of a surgeon I carefully slid my spoon under the soft egg, slowly lifting it from the dish as Paul held his plate close. We were so close with mere inches between my spoon and his plate when splat! the egg slid off the spoon on to the table and splattered. More laughter ensued though needless to say I was a bit embarrassed when a member of the waitstaff came to clean it up. “Oh excuse me, I don’t get out much.” 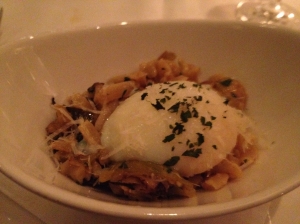 Obviously the photo above was taken before the unsuccessful removal of the egg. While I’m sure that the egg would’ve added an unctuousness, this dish was really delicious. The smokey smell was heavenly and hit you as soon at it was placed on the table and the flavor definitely matched.

For my main course I chose the scallop chowder. Which was the absolute standout of the night.

It was really a deconstructed chowder. Flavorful comforting broth with a bit of spice surrounded a bed of silky, creamy, buttery potato purée on top of which had been place a generous helping of succulent, perfectly cooked shellfish.

By the time we’d cleared our entree plates we were tipsy and it good spirits so we decided to take a serious look at the dessert menu. Apparently Paul and I forgot that we’re not big sweets eaters because, in solidarity with Janet, we both ordered dessert. In my defense though, lemon is one of my weaknesses and so how could I not order the lemon merengue tart with an accompanying citrus and white chocolate salad. 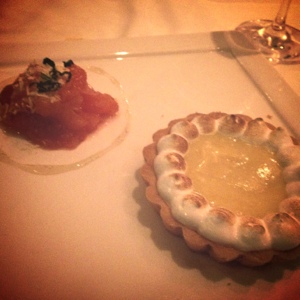 This was my kind of dessert, tart and sweet lemony custard with just a whisper of meringue encased in a light buttery crust. Yum.

The food at Telepan did not disappoint, which only made my issues with the service more surprising. You may be surprised to hear though, that I very much want to give Telepan another try. Based on everything I’d previously heard and my high regard for Bill Telepan I truly believe that this was just an off night and one not so great waiter. Next time though, I’ll definitely be calling first!