Last week I had to be in Boston for work all week and conveniently one of my besties wedding showers was on Sunday so I stayed all through the weekend. It was an exhausting trip (though spending the weekend with some of my besties was awesome), but left me with some great food experiences because, as you may remember Massachusetts has awesome food allergy legislation that let’s me eat there with very little worry. Love!

My friend Nadira and I traveled to Boston together arriving around dinnertime on Monday. Having worked in the morning followed by a 4 hour train ride we were tired and hungry. We quickly dropped off our things and headed out to a nearby BBQ joint, Sweet Cheeks Q. The restaurant, which is fairly new, had been recommended by several people before our visit, but it wasn’t until we got there that I found out it was owned by Tiffani Faison, a finalist on Top Chef season one!

Don’t let that little one fool you, she is hot hot hot!

When we arrived all the tables were full, but the hostess informed us that we could sit at any of the counters along the window and would still get waiter service there. How cool! We chose seats, got comfortable and studied the menus as soon as our waiter handed them to us. Our waiter explained to us that Sweet Cheeks is a true Texas style BBQ which means everything is dry rubbed and you put the sauce on yourself. There were 3 sauces in front of us, Sweet Cheeks barbecue sauce, a HOT habenero sauce and a Carolina style vinegar based sauce.

Normally I’m not a big cocktail drinker, preferring beer or wine, but when the waiter recommended the House Bill 819, Nadira and I both decided to order one. The House Bill 819 is made from tea infuse whiskey with mint, lemon and simple syrup and, like all the drinks at Sweet Cheeks, are served in a mason jar. The drink was strong and delicious. 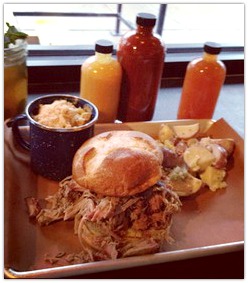 Pretty much a perfect meal

For our dinner Nadira and I both chose pulled pork on bulky rolls. For $6 more you can get one “cold scoop” side dish and one “hot scoop.” I went with the mac and cheese and sour cream potato salad and Nadira went with the potato salad as well and the barbecue baked beans. I had given the waiter my allergy card earlier and he went to check with the kitchen after I’d ordered. Our very sweet waiter returned to our table and told me that the kitchen wanted me to know that the food I ordered was safe, but since they do use a lot of the foods I’m allergic too they might be “in the air.” I politely replied, “But none of the things on my allergy card are in what I ordered and you segregate ingredients in your kitchen right? OK, than I’m good”

Mini-rant time: While I appreciate their vigilance let me clear up two misconceptions. 1. Reactions to airborne food allergies is extremely rare. Most of us with potentially life threatening food allergies can be near those foods with no problem, we just can’t eat them or touch them (and even touching them, if you immediately washed your hands would likely only trigger itching/swelling/hives and not anaphylaxis though I’m not picking up a handful of nuts anytime soon). 2. Again I truly appreciate that the restaurant is trying, but obviously if I’m eating at a restaurant, any restaurant, I already know that there are ingredients I can’t eat “in the air.”

A little while later our trays emerged from the kitchen and did not disappoint. O.M.G. I don’t even think I have the words to describe how good this was! The mac and cheese and potato salad were delish, but the pulled pork was the star of the show. It was everything you want in pulled pork; sloppy, juicy, meaty and slightly smokey. Nadira and I are both big fans of spicy food and the habenero sauce was not for the faint of heart. Neither of us had much interest in the Carolina style sauce instead dousing our sandwiches with the flavorful barbecue sauce which packed a little kick and then carefully adding a few drops of the habenero sauce (even for spicy food junkies this stuff was lethal!). 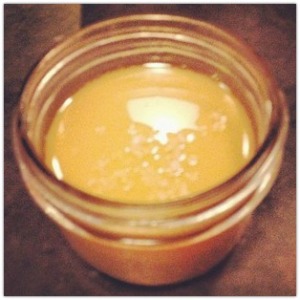 We both finished about half our trays and asked for the other half wrapped since we had a refrigerator where we stayed. We were stuffed yet somehow Nadira, who weighs approximately 15lbs, can somehow always find room for dessert. As you know I’m not a huge dessert person and even though when waiter described the butterscotch pudding with salted caramel top to Nadira it sounded like my perfect dessert I insisted I wasn’t having any. Then the waiter brought out the dessert and informed me that he’d double checked with the kitchen and it was safe for me and after that, and Nadira’s chiding me to split it, how could I resist?

The dessert came in a half sized mason jar which made it the perfect petite dessert to split. The pudding was smooth and creamy and not cloyingly sweet. The caramel on top was gooey, sticky perfection and the flex of sea salt played perfectly with its sweetness. I’d consider selling a kidney for that dessert. We left fat and happy with Nadira vowing she’d return on Thursday night before she left to go back to New York. Nadira does not make idle promises…

I forgot to take a picture before we dove in

On Thursday, after our day of meetings, Nadira headed back to Sweet Cheeks and Kate (yes vegetarians can sit in bbq joints) and I, who both had dinner plans later, joined her for a drink. Nadira ordered another pulled pork sandwich, Kate got the House Bill 819 and I went with a cocktail again, the Dollywood which was a mix of vodka, lemon cordial, lemon juice and sparkling wine. I forgot to take a picture of it, but I loved it even more than the House Bill. A few sips in Kate suggested she and I get a couple of biscuits with honey butter. The biscuits were enormous and neither of us could finish them which was sad because they were crazy amazing. A little crusty on the outside and buttery, soft and fluffy on the inside.

On Friday, after all of my meetings were over, my friend Heather picked me up so that I could stay with her and her husband Justin for the weekend. While we were talking I mentioned Sweet Cheeks which Heather and Justin hadn’t yet tried. We had tickets to a Sox game the next day and, after hearing my description, Heather requested that we go to Sweet Cheeks for lunch beforehand. That’s right people, I was there 3 times in one week! Does that say something about how amazing this place is? I didn’t bother with pictures at lunch, but I once again had the pulled pork with mac and cheese and this time coleslaw, Justin had the brisket on Texas toast with two sides and Heather had the ribs with two sides. Heather and Justin loved the food as much as I did and I made them promise me we could go back every time I’m in Boston.

The verdict:
Food rating: A+
Service/food allergy accommodations: A-
Overall rating: Made me want to lick my plate in public!