It looks like I might be travelling to Finland this summer. I’m really excited about that, but I don’t want to talk about it because I don’t like talking about things before they’re official. The Finns love Hockey and I’m in full on Hockey fever right now (go Rangers!), but I’m way too paranoid of a sports fan to talk too much about it when we’re tied 2-1 in the series so I don’t really want to talk about that either.

Instead I’ll talk about licorice!

I looove licorice. No not those waxy, red, articfial straw shaped things; I mean real licorice or as we Americans call it, usually with disdain, black licorice. I have never understood why it gets such a bad wrap in the States because I love it. I come from a licorice loving family, maybe because my Grandparents are European, and we always fought to see who could get to the black jelly beans fastest.

I’ve spent a lot of time in Northern Europe, having lived in Denmark, and have often joked with my friends there that if I ever visit Helsinki I expect to find the streets paved with candy. Every time I pick up a package of non-chocolate candy anywhere in Europe it seems to be made in Finland which leads me to believe that these people love their candy. Lucky for me all of the strongest and best licorice also seems to come from Finland. Yum! While I love to travel I’m not much of a souvenir hunter due to my general aversion to having “lots of stuff,” but I know that if I make it to Finland this summer I will be returning with bags full of the best licorice I can find (and extra for my Grandma of course!). It may not last as long as some souvenirs, but I’ll smile every time I eat a piece.

In preparation for this possible trip to Finland, it only made sense to visit there, culinarily speaking, for my “F” recipe. Last night I whipped up some Lohikeitto, Finnish Salmon Soup. I only made two real changes from the majority of recipes I saw in my research. First, most recipes just called for water while very few called for fish stock. I’m a big believer in getting as much flavor in things as you can, but, since salmon is a fairly fishy fish, was afraid the fish stock might be too much so I used vegetable stock. The second change was that I didn’t peel the potatoes. I refuse to ever peel small potatoes for any recipe unless it’s absolutely necessary. Not only is it less work, the skins of potatoes have tons of nutrients so you’re getting more health benefits too.

Add vegetable broth and bay leaf and bring to a boil. Add potatoes. Bring pot to a medium simmer until potatoes are tender, 10-15 minutes.

Add allspice and salmon and simmer until salmon is cooked through, about 5 minutes.

Turn heat to low and gently stir in cream and milk. Add salt and pepper to taste and sprinkle dill to taste on top.

It ain’t no licorice

This soup was fine, but nothing special. I admit that I’m pretty neutral about salmon itself. I’ve never really understood it’s popularity, especially among people who don’t eat any other fish. The texture is nice and firm, but the flavor if fairly strong. The soup could’ve used more pepper, but I really don’t think there’s any way to make this dish any more exciting.

Maybe this summer I’ll meet a Finnish chef wh0 will teach me the culinary secrets of the Finns, but until then I don’t think I’ll be making this soup again. Either way I think my trip will be way more exciting than this dish. 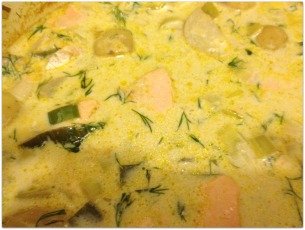 2 comments on “F is for… Finland; Salmon Soup For the Soul”