I’m on a Meat Break right now which is sort of like Spring Break, but without the keg stands, bikini contests, or college kids getting crazy on the beach. Also MTV doesn’t record any of it and no one comes home with a “social disease.” Hmmm, now that I think of it, Meat Break is nothing like Spring Break.

I’m a big believer in limiting meat consumption for both environmental and health reasons. I normally eat a good number of vegetarian or fish meals, but due to various circumstances, including celebrating Passover, I have been a giant meat-eating machine for the last couple of weeks. I’m feeling both gross and guilty so I’m going to get back some equilibrium by mostly refraining from meat for the next week or two.

Slicing lemon for the fish

I got the most gorgeous ramps (wild leeks) at the farmer’s market last week. After a bit of googling, I decided to roast the stalks, then chop the leaves finely and saute them with mushrooms. Ramps have a very distinct garlic/onion flavor to them and roasting brings out their natural sweetness. Yum!

Preparing the ramps was more of a technique than a recipe so I won’t bore you by sharing it. If you’ve roasted and sautéed veggies before you already now what to do. In addition to roasting, you can pretty much use ramps in any recipe that you use leeks in, just be prepared for the (awesome) garlicky flavor! 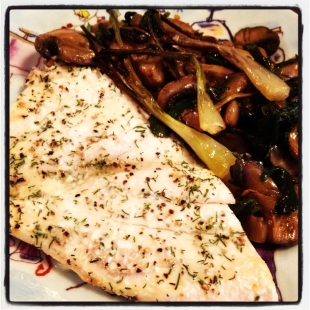 Delicious! Definitely not missing the meat.

4 comments on “Ramping It Up”