It’s late and I just realized that if I don’t blog today there’s no way I’ll get in my Ten Days of Thanksgiving so I’m posting a picture what I ate on the night of the storm so that I had an excuse to blog.

A nice comforting bowl of polenta with meat sauce. 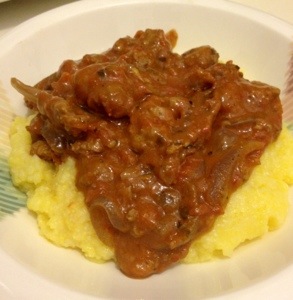 Today I’m thankful for social media. There are A LOT of bad things about social media and trust me I could right a novel about that, but today I’m thankful for what’s right about it. In the aftermath of Hurricane Sandy, I saw quite clearly how powerful a tool social media can be. After the storm people were sad and scared, they needed a community and they needed a quick way to check on friends and neighbors so they took to Facebook. One person who’d been able to get back to a hard hit area would check on friends and neighbors and property and then report back to all those Facebook friends, then those friends would post to their own pages and another set of people could see updates and so on and so on. Entire communities displaced by the storm found each other and offered each other words of support.

Facebook and Twitter and blogs also helped us to let the world know what was going on here. Most amazingly though, and entire movement of volunteers and donations was started and being maintained using social media. With the power of a few tweets, Occupy Sandy can let us know where volunteers are most needed or what supplies they’re in urgent need of and their followers step up to the plate and deliver.

So thank you social media, you’ve got many many problems, but often times you are simply awesome.