We do Mother’s Day dinner on Saturday night instead of brunch on Sunday at a restaurant of her choosing. This year she chose Restaurant Loi, which we’d been talking about trying for a while.

Maria Loi, chef and owner of Loi, is considered the Martha Stewart of Greece having a successful television show and many cookbooks. About a year and a half ago Maria decided to take on the big apple and opened a restaurant two blocks from my apartment –  score!

I called ahead, as always, to let the restaurant know about my food allergies. The hostess who answered had several food allergies herself. We joked that we should compete to see who has more and she assured me she’d make sure the chef and waiter knew. This is exactly how every hostess should deal with calls about food allergies; take it seriously, but be warm and put me at ease. When we arrived at the restaurant and checked in the hostess informed me that she was the person I’d spoken to and I’d be well taken care of. 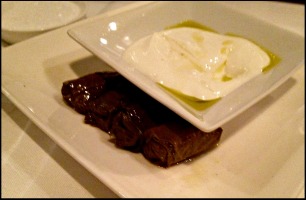 As an amuse bouche we were served Maria’s award winning stuffed grape leaves with yogurt dipping sauce. The amuse bouche and the complimentary bread are usually where restaurants fail on food allergic dinners. As is common, the amuse and bread were put on the table without anyone reassuring me that they were safe for me. I could’ve asked our waiter to check, but I didn’t bother. My parents said these were amazing though.

For my appetizer I had the Spanakopita, spinach pie, which is one of my favorite Greek dishes. It was probably the best Spanikopita I’ve ever had between the perfectly crisp , buttery phylo and the soft, flavorful spinach and feta filling. I could’ve eaten a pan of this. My mom raved about her Phylo Wrapped Shrimp with Pomegranate Sauce and my dad loved his baked Gigante Beans.

Since I’d started out with one of my Greek favorites, I decided to continue the theme and my dad and I both order one of my go-to Greek dishes, Seafood Orzo. Again, this was probably the best version of this dish I’ve ever had. It was a mor subtle and refined version of a Greek comfort food classic. The spices were slightly differnt and so delicious and all of the seafood was super fresh and perfectly cooked. My dad loved his too and my mom said her Lamb with Lemon Potatoes was fantastic. 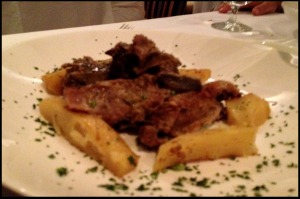 When it was time for dessert the waiter told me that the kitchen thought the flourless chocolate cake would be the only dessert safe for me. I really don’t like flourless chocolate cake (way too chocolatey for someone like me who isn’t a big chocolate eater) and I was stuffed already so I just had a cup of tea. The service was lovely and showed true Greek hospitality (most of the staff is in fact Greek) and the best part is that at some point in the night Maria Loi herself came out of the kitchen to greet each table. I had met her once before when I had a drink at the bar and both times I was struck by how warm and accessible she is. I will definitely be returning to Loi!

The verdict:
Food rating: A
Service/food allergy accommodations: A-
Overall rating: Made me want to lick my plate in public!